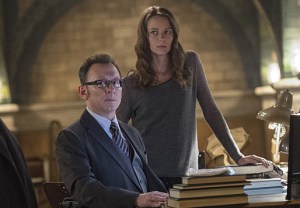 CBS’ Person of Interest kicked off a winter hiatus-bridging “trilogy” with a meeting of the minds.

Make that, a meeting of the minds.

Samaritan was hot for a sit-down with The Machine, but first had to get Her attention. To that end, Samaritan erased crime from New York City for a day, getting to POIs before Finch’s team could as well as orchestrating the discovery and arrest of assorted elusive ne’er-do-wells.

When that gesture failed to get Root, as Her proxy, to sign off on a meeting, Samaritan flipped the script and brought chaos (you know, business as usual) to New York City, by thwarting the assisting of POIs, leaking WITSEC lists and what not.

That led to a visually fun standoff in a series of church pews, where Root got the drop on Greer’s lackey Lambert, only to then feel Martine’s own pistol grazing the back of her own head. Reese, in turn, was revealed in the rafters with a BFG trained on Martine. Cooler heads prevailed all around, as Root took receipt of the address at which The Machine was to “have a talk” with Samaritan.

The artificial super-intelligences’ exchange came in the form of Root sitting at a desk in an elementary school opposite a fresh-faced adolescent (played by Boardwalk Empire‘s Oakes Fegley) who was speaking as Samaritan’s avatar. In a nutshell, Samaritan was there to show off her plumage and declare superiority, warning the Machine that She will be destroyed. The only question is: Will She let her human agents die with her?

Previewing the future, Samaritan scoffs at the humans’ willingness to “so ardently” follow “so-called” religious beliefs over thousands of war-filled years. “But now they will only need to believe in one thing — me. For I am a god.”

“You know you can’t win, don’t you?” Samaritan warns its kinder counterpart. She asks, “Is that why I am here? To meet my destroyer?” Samaritan explains, “I wanted to see inside the mind of a fallen god; this way I can learn from your mistakes.” Again, Samaritan asks: “Will you give your life to save your human agents?” The Machine maintains that her people share her beliefs, that this world — that humans’ free will — belongs to them. “So be it,” Samaritan responds, acknowledging the stalemate.

The episode ends with Greer looking on as Samaritan then sets in motion an event that will impact more than “this small city” — widespread economic ruin, by way of a manipulated financial market.

Elsewhere in the hour, we saw Shaw’s growing, conspicuous concern over the idea of Root walking into a death trap, eventually leading her to escape “detainment” in the subway bunker — and thus leaving Finch on high alert. Flashbacks, meanwhile, shed light on Greer’s past as an MI-6 operator who, tragically betrayed by his double-agent deputy chief, turned around and killed the KGB mole and then “burned” his own identity as an agent.

What did you think of the episode “The Cold War”?