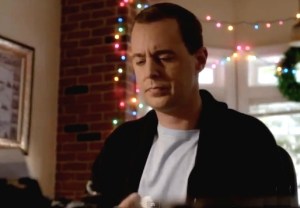 CBS’ NCIS this Tuesday celebrated Christmas with an episode that paid tribute to the many “rules” Gibbs has laid out over eleven-and-a-half seasons and also weaved in a surprising emotional punch.

On the surface, the holiday-themed outing was about a suspicious Washington, D.C.-wide Internet shutdown and how the NCIS team handled it, with the assist of three hackers that Gibbs & Co had put behind bars in recent years: “I.T. Kevin” (played by Ethan Rains), Heidi Partridge (Erin Allin O’Reilly) and Ajay Khan (Chuck‘s Vik Sahay).

McGee related the case to his father, Admiral John McGee, through a letter he typed throughout the episode, peppering his missive with references (and nostalgic flashbacks) to Gibbs’ Rules, probably accounting for most of them — including the mysterious No. 51, “Sometimes, you’re wrong.” That last one nudged McGee to not give up on getting hacker Heidi to roll on a compatriot dubbed “Krampus” but instead leverage her to see the “monster” she was lovingly abetting.

Case closed, McGee was meticulously positioning the new (and desperately needed) monitors that for too long had sat in a storage closet just down the hall when Gibbs urged him to go see the Admiral, who had cancelled a cancer surgery to spend the holiday with his family. “Your father made time for you,” Gibbs said. “Return the favor.”

And it’s a good thing Tim did, because at episode’s end, it was revealed that the letter he had been typing was not bound for any mailbox, but his father’s coffin, inside of which he tucked it.

After recounting the rules his own father enforced over the years — “Always be prepared,” “Always stand up for yourself” and “If you’re wrong, admit it” — McGee said to the late admiral, “Every moment with you, from growing up to these last few days, meant something to me. I’ve heard it takes a man to make a man. Well, you helped make me one.”

What did you think of the episode “House Rules,” its bevy of old clips featuring Kate, Ziva and others, and the sad final twist?