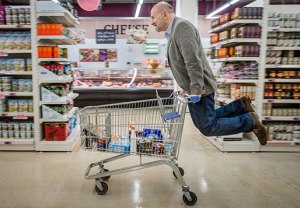 “Fifty shades of gay, and beyond!” is how Russell T Davies (Queer as Folk, Doctor Who) describes his two new series, Cucumber and Banana, coming soon to Logo TV.

The network on Tuesday announced co-production with the UK’s Channel 4 on the the hour-long Cucumber (pictured) and half-hour Banana, both premiering stateside in early 2015. They’ll first air in the UK in January.

Though both series will feature interwoven characters in Manchester, England, they’ll focus on two different generations. Cucumber will chronicle the slow demise of a nine-year relationship between boyfriends Henry Best and Lance Sullivan, while Banana will expand to include the younger people in Henry’s world, “telling stories of modern love.”

In addition to being on the naughtier side, both dramas will “explore gay, lesbian, bisexual and transgender stories, as well as love beyond labels.”

“Cucumber and Banana are groundbreaking for the way they show intertwined narratives from two generations’ different perspectives,” Stephen Friedman, President of MTV and Logo TV, says in a statement. “Even more importantly, the shows tell hilarious, incisive and very human stories.”

Your thoughts on this massive endeavor? Do you fancy yourself a Cucumber, or more of a Banana? Drop a comment below.