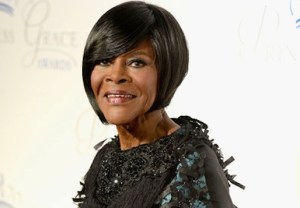 Earlier this year, she took The Trip to Bountiful. In early 2015, Cicely Tyson will pay a visit to Murder-ville.

The Emmy-winning and Oscar-nominated actress will guest star on an upcoming episode of ABC’s Thursday night hit How to Get Away With Murder, TVLine has learned.

As of now, Tyson is only booked for one episode — and the network remained tight-lipped regarding details about her character. (Could she be the mother of Viola Davis’ hard-charging defense attorney Annalise Keating? We can but hope!)

Tyson’s casting is yet another high-caliber get for the freshman drama. Last month, TVLine reported that Oscar winner Marcia Gay Hardern will board the series in a recurring role when it returns from its winter break.

How to Get Away With Murder returns Thursday, Jan. 29, with the last six episodes of its Season 1 run.

Excited about Tyson’s casting? Any theories (or hopes) about her character? Sound off below!