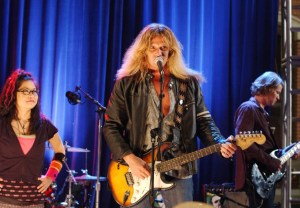 Galavant, are you ready to rock?!

Bach’s song will be heard in Episode 2, which airs in the second half-hour of the series’ premiere on Jan. 4 at 8/7c. The tune, featuring Bach’s vocals, will play during a sequence in which Galavant (played by Rogue‘s Joshua Sasse) trains to joust Sir Jean Hamm (guest star John Stamos, Full House).

The eight-episode series, which will air back-to-back episodes for four Sundays, tells the story of a dashing knight who fights — and sings — to reclaim his happily ever after from the evil King Richard (Psych‘s Timothy Omundson)