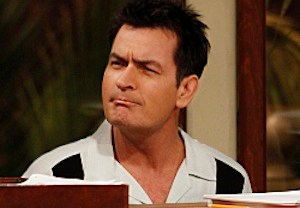 Might Charlie Sheen wreak havoc on Two and a Half Men again?

During Ashton Kutcher’s visit to The Ellen DeGeneres Show, airing Friday, the host asked the star if the actor behind Charlie Harper would return for the CBS comedy’s series finale.

After some silence and flailing, Kutcher coyly replied, “If you’re working on the Warner Bros. lot, if there’s sirens, come save me.”

* Arrow has tapped Marc Singer (BeastMaster) to recur as the DC Comics character General Matthew Shrieve, who is the leader of the Creature Commandos, Comic Book Resources reports. On the CW series, he will feature significantly in the latter portion of this season’s flashbacks.

* CSI: Miami alum Eddie Cibrian has landed a multi-episode arc on ABC Family’s Baby Daddy, per EW.com. He will play Ross, a charming, chivalrous, genuinely good guy who hits it off with Riley, not knowing that he is her new boss.

* Ashley Hinshaw (True Blood) will appear on Season 2 of True Detective as a troubled starlet, our sister site Deadline reports.