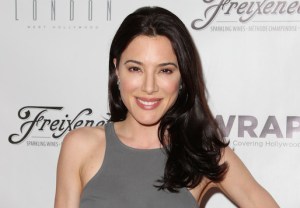 Defiance‘s Jaime Murray sure must like spending time in the make-up chair.

The actress has been recruited to play a corpse-inhabiting evil spirit in the upcoming back half of Sleepy Hollow‘s second season, TVLine has learned exclusively.

Murray will portray a vetala, or ghostly being from Hindu lore. She’ll appear in Episode 14, which is titled “Kali Yuga.”

In addition to her work as the alien Stahma on Syfy’s Defiance, Murray’s career includes roles on Warehouse 13, Ringer, and Dexter.

In other Sleepy casting news, Sharif Atkins (White Collar, ER) has been cast as Calvin Riggs, the upright (and good-looking) photojournalist Michael Ausiello told you about a few weeks ago.

Very excited @WhiteCollarUSA @SharifAtkins will be on @SleepyHollowFOX Rugged, award-winning photojournalist, grew up in Sleepy Hollow.

We hear the only family hometown boy Calvin has left is his younger brother, Daniel.

Thoughts on these castings, Sleepyheads? Sound off in the comments!