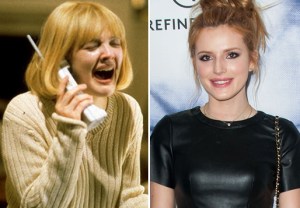 Bella Thorne is ready to Scream it up.

The former Disney Channel star says she will appear in the pilot for MTV’s upcoming Scream series as an iconic character from the original 1996 film. (No, not that one.)

Thorne recently revealed during a Facebook Q&A that she’ll be slipping into a role inspired by Casey, the girl from the beginning of the movie played by Drew Barrymore. If you’ve seen Scream, you know why Thorne is only slated to appear in the pilot. (Spoiler alert: Casey gets murked.)

TVLine has reached out to MTV for confirmation.

Will you be watching Scream when it premieres in Oct. 2015? Drop a comment with your thoughts on the new series below.