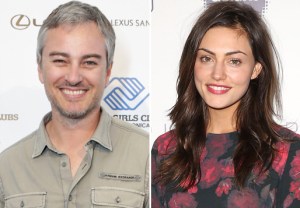 Some very familiar faces are heading to CBS’ Stalker, including a Dawson’s Creek alum and an Originals queen-to-be.

Kerr Smith, who currently recurs on The Fosters, will guest-star as a high-profile news anchor who finds himself re-targeted by a stalker from his past, E! Online reports. This casting reunites Smith with showrunner Kevin Williamson; the two previously worked together on Dawson’s Creek.

E! also reports that Phoebe Tonkin (The Originals) will guest-star on an upcoming episode, playing a targeted lifeguard named Nicole.

* Investigation Discovery has announced Breaking Point, a new series premiering Jan. 15 (10/9c). From Intervention creator Sam Mettler, Breaking Point follows families who believe they’re being filmed for a documentary about their lives of crime — only to be faced with a life-changing intervention.

* NBC has released promos for Martin Freeman’s appearance on Saturday Night Live (Saturday 11:30 pm), which finds the Sherlock star dancing with Kate McKinnon, slipping on Bilbo’s ring and going all Benny Hill — albeit against his will. Behold: