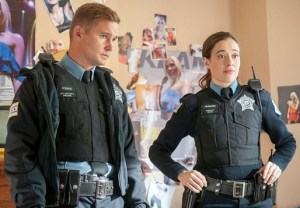 Word to the wise: don’t bicker while on the job.

Because as Chicago P.D.‘s winter finale on Wednesday night demonstrated, if you do, you won’t be prepared for what’s about to hit you. Or in the case of this episode, what’s about to strike your partner.

When Roman and Burgess are assigned to ridealong with his ex-partner Jen (aka the one he fell for), things get tense very fast. “I should have called in dead,” Roman tells Burgess. Hey, it can’t be that bad, can it? Oh yes, it can, because Roman and Jen proceed to argue and open old wounds throughout their shift.

Jen reveals the real story to Burgess. She and Roman had a fling — why did I think Roman’s feelings were unrequited? — despite knowing better. Then she moved on to “bigger and better things,” she explains, flashing a ring. But apparently, Roman couldn’t let go and crashed the engagement party, hitting her fiancé’s father in the face!

Earlier in the episode, Burgess wondered if she and Ruzek would turn on each other should things go bad. He calmed her fears with a kiss. And thank goodness for that because it could be their last! Roman and Jen are so busy fighting that Burgess heads to check out a building herself after repeatedly yelling at them to shut up. That’s when you know something bad is going to happen, because you never go it alone. And of course, Burgess is shot as Roman and Jen race over.

Elsewhere: Lindsay debates whether to take a job with the federal task force; one of their special agents even shows up to woo her. “I’m proud of you, Erin,” Voight tells her in an uncharacteristically “Awww” moment. “And whatever decision you want to make, I’ll back you.” In the end, she decides to “get in front of” of the problem and take the gig.

Chicago P.D. fans, do you think Burgess will survive? Are you excited to see Lindsay in her new job? And now that she’s not part of the Intelligence unit, is a relationship with Halstead not too far off? Grade the episode via the poll below, then hit the comments with your thoughts!