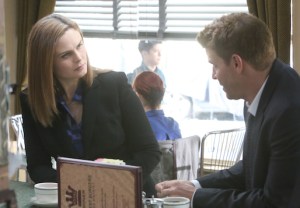 Someone get Christine an “I’m The Big Sister” T-shirt!

“We are so happy for Emily,” showrunner Stephen Nathan says in an exclusive statement to TVLine. “As before, rather than try to hide this from a sophisticated audience, we are integrating her pregnancy into the show.

“Booth and Brennan, like most couples today, will continue to work, play and catch murderers — maybe they’re unique in this respect — as their family grows,” Nathan continues. “As with most new situations that have arisen in 10 years, we feel that this can only enhance the show. Although I’m sure there will be a vocal group of fans eager to attack me, I hope they will be pleasantly surprised by what we have in store.”

Word on the creative decision came days after the actress’ rep confirmed that she and husband David Hornsby are expecting Baby No. 2.

Deschanel’s son, Henry, was born in 2011; his birth coincided with the Season 7 arrival of Brennan and Booth’s daughter, Christine.

Bones fans, are you looking forward to the stork’s second visit to Brennan and Booth’s house? Tell us about it in the comments!