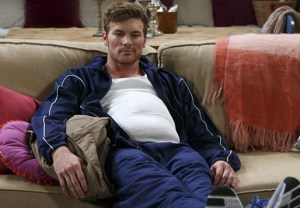 Here’s what’s going down: Ben finds his inner humbug and wishes Christmas didn’t exist at all. What he doesn’t realize, however, is that he’s also wishing Emma away since he originally met her mother at a Christmas party.

“We go into a bizarre dimension where … you see what our lives are like without Emma,” Derek Theler tells TVLine. “It shows how much darker our lives would be. Danny’s not as happy, not as successful — and definitely not in shape.” 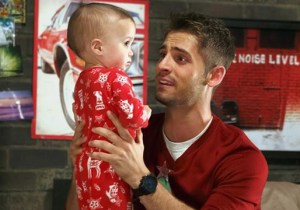 (Side note: For you timeline aficionados, Theler says this Christmas special happens “…at some point when Emma was a baby.” Think of it as a timeless, stand-alone event, rather than wondering why Danny’s suddenly back from Paris.)

And before you ask, the festive sweaters are staying on tonight. Unlike this year’s Halloween special — which included this Magic Mike homage — Theler says there’s “a lot less stripping” in the Christmas special, not that he’s complaining.

“I was the most nervous out of all of us to, like, take off my clothes and try to look sexy,” he admits. “We only had about a day and a half to figure out what we were doing. Tahj [Mowry] was really into it, but he’s actually a really good dancer.”

In lieu of stripping, however, Theler promises a “Wheeler family band,” which also sounds fun… but for different reasons.

“There’s a whole musical number that we put on,” he says. “I got to [pretend to] play the bass for the first time in my entire life, and I also got to go into a recording studio and sing. I’m just as bad as I thought I would be.”

Baby Daddy fans, what are you hoping to see tonight — and beyond? Drop a comment with your thoughts below.