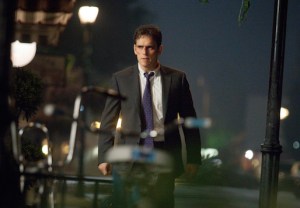 Wayward Pines, the 10-episode Fox thriller from M. Night Shymalan, will premiere on Thursday, May 14 at 9/8c, the network announced Tuesday.

The event series, which will debut simultaneously in more than 125 countries, follows a Secret Service agent (played by Matt Dillon, There’s Something About Mary) who comes to a deceptively bucolic Idaho town to search for two federal agents who’ve gone missing.

Shyamalan (The Sixth Sense, Signs) co-executive-produces the series and directed the premiere.