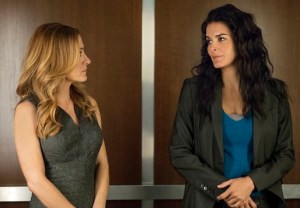 TNT’s Summer 2015 forecast calls for crime sprees with a high chance of arrests.

The cable network announced today that it has renewed its hit drama Rizzoli & Isles for an 18-episode Season 6, our sister site Deadline reports.

The Angie Harmon-Sasha Alexander procedural has been a Top 5 basic cable series for five straight years, Deadline notes, but a renewal was held up due to a “difficult” negotiation between the network and producer Warner Horizon.

Excited about more Rizzoli & Isles on your TV screen? Sound off in the comments!