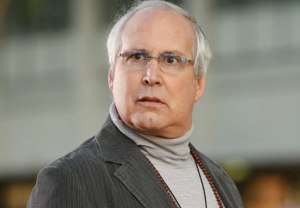 Might Community fans see another hologram of Pierce Hawthorne in Season 6? Hmm, not so fast.

During a Monday Reddit AMA, former cast member Chevy Chase said his longtime Greendale curmudgeon would make a brief appearance during the comedy’s sixth season, which will stream on Yahoo! Screen.

“I will be in a small cameo at the beginning… and if they ask me to come back and do one or two [more] appearances, it’s a possibility,” the actor wrote.

However, a rep for Sony Pictures Television, which produces Community, tells TVLine that Chase “is not confirmed to appear in Season 6 at this time.”

Chase left the series halfway through Season 4, following a series of clashes with showrunner Dan Harmon. His character briefly returned as a hologram in the Season 5 premiere, before the Greendale gang learned of Pierce’s off-screen death.

Would you like to see Chase return to Community somehow, in some way? Drop a line in the comments with your thoughts.