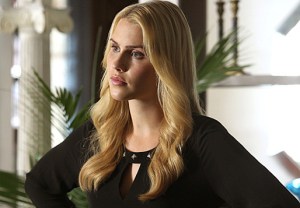 Heads up: Stop reading now if you haven’t watched Monday’s episode of The Originals. It’s about to get real spoilery up in here.

Just in time for Christmas, Monday’s Originals midseason finale gifted fans with more twists than they could shake a white oak stake at. But for now, let’s focus on the biggest twist of all…

Was it Elijah telling Hayley to marry Jackson, then making sweet supernatural love to her atop a fine antique table? Close, but no.

Was it Klaus turning Esther into a freakin’ vampire? Getting warmer!

Give up? The biggest twist of all was Rebekah’s decision to accept Esther’s offer, leaving her original body and entering that of a young witch (played by Maisie Richardson-Sellers) — one handpicked by Kol, no less. TVLine spoke briefly with executive producer Michael Narducci about Rebekah’s big swap, and how the deal might (read: probably will) come back to bite her in the now-mortal butt.

TVLINE | So, what’s next for Rebekah?
Putting Rebekah into another body is a great instance of “be careful what you wish for.” Now that she’s no longer in her original immortal body — that strong, fast body that can endure anything — she’s just a mortal witch. She’s got a whole new set of powers, but she’s not immortal anymore. If she’s stabbed or killed, will that be the end of Rebekah? And will this Faustian deal be worth it to her? That’s one of the things we really want to explore.

TVLINE | Does this mean we won’t be seeing Claire Holt as Rebekah anymore?
The great thing about our show is that we have a built-in engine. We’ve seen Kol in a new body, for example, but we also still get to see Nathan Buzolic quite a bit in flashbacks.

TVLINE | But is the body swap permanent?
This isn’t necessarily a permanent change. It’s not like something is going to happen to Rebekah’s original body, or that once she makes this change, she can’t go back — unlike Kol and Finn, whose original bodies were destroyed. Rebekah’s body will continue to exist, so there are many different story opportunities for us to explore.

Your thoughts on the midseason finale, specifically Rebekah’s new journey as a *gulp* mortal? Drop ’em in the comments section below.