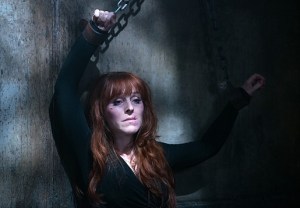 After her less-than-pretty first interaction with Sam and Dean, Supernatural‘s new witch, Rowena, isn’t itching to get close to the hunters again.

“I like to keep my healthy distance, if possible,” her portrayer Ruth Connell says with a laugh.

That might be easier said than done now that Rowena has been captured by one of the duo’s biggest frenemies, Crowley, who also happens to be her son!

Needless to say, Tuesday’s episode (The CW, 9/8c) is going to feature one “complicated” reconciliation, with mother and child very much “cut from the same cloth,” the actress previews below.

TVLINE | It took Crowley a minute or two to register that you were his mother. Is there a reason for that? Is she in a different body?
He’s not in the same body. I don’t recognize him. It’s a coincidence that I turned up at the same place, at the same time, and interfered with what’s going on with him… There’s a moment when I say, “Wee boy,” and there’s something about him that’s making me go, “Oh. What’s this?” He’s just staring at me with an open mouth. So Crowley recognizes me because, obviously, I have not changed in 400 years or however long it’s been.

TVLINE | Do they address how she has survived for hundreds of years?
I’m a very powerful witch. I imagine I’ve got some amazing rejuvenating spell. [Laughs] Just wiping the years away. Keeping the years at bay.

TVLINE | So when she’s mouthing off to him, she’s mouthing off to the King of Hell, rather than her family.
I’m mouthing off to the guy who’s responsible for me being captured and tortured. It’s one of the traits of Rowena — when her back’s up against the wall, she’s going to come fighting and challenging. She’s not going to apologize or simper or whimper or beg for mercy. She’s like her son, in a way. So yeah, she’s provoking him in that moment. It’ll be interesting to see the conversation after the moment he says, “Mother.” [Laughs] You’ll get more information on Tuesday. You’ll see how their relationship unfolds.

TVLINE | What was their relationship like in the past? It was pretty telling that Crowley looked scared and horrified when he realized who he was staring at.
You’d be pretty shocked if you saw your closest relative [who] you hadn’t seen for a few hundred years, and they turn up in a complete wreck in front of you. I don’t want to give away too much about the episode, but it’s definitely not a simple relationship. There are many layers to the relationship between Crowley and his mom.

TVLINE | A lot of time has passed since they last saw each other. Will that only serve to intensify the complications? Or will we see a different dynamic from what they used to have?
There’s a lot of water under the bridge. But, in essence, that’s the fun of it. You know what it’s like with your own parents or relatives. No matter how accomplished you are in the world, when you go home, you’re still the daughter. You become the teenager again. It’ll be interesting to see what aspects of Crowley come out in the presence of his mom. We’re all slightly reduced back to our childhoods when we are with our parents. 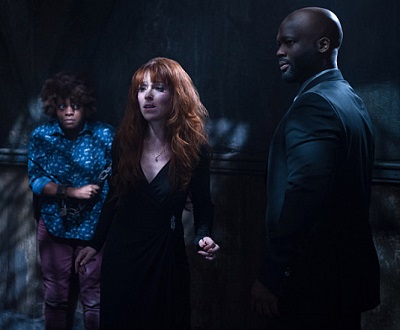 TVLINE | Is it about power? Or is she maybe trying to build a family/support system for herself?
We’ve all got lots of internal reasons for doing stuff. And you’re asking a really brilliant question because it speaks to the essence of Rowena. There can be more than one reason why you want to do something. It might seem that it has to do with power, and deep down, there’s probably a very sensitive, human need underneath it as to why somebody might want to belong or have their space in the world.

TVLINE | In the photos for this week’s episode, it looks like Crowley’s got the upperhand. Rowena’s chained up and a little worse for wear. Is it really a one-sided fight?
Rowena is her son’s mother. It’ll take more than chains… Rowena uses her wits. If anyone would know a way around Crowley, it would be Rowena.

TVLINE | Do you also cross paths with the Winchesters in this episode? Or are your scenes mainly with Mark Sheppard?
I’m not sure how much I can say about that. I spent a lot of time on set with Mark, which was amazing. I love working with Mark Sheppard. He’s really taken me under his wing. He’s wonderful. I came across the Winchesters in my first speaking episode, Episode 7, and it remains to be seen how much trouble I can cause for them long term. With perhaps long term, there’s more involvement.