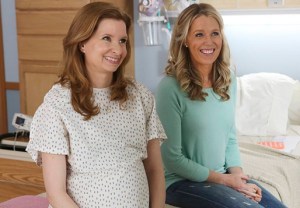 Who’s up for some totes kewl Playing House news?

USA Network is bringing the comedy back for an eight-episode second season in 2015, according to The Wall Street Journal.

The Connecticut-set series finished airing its first season almost six months ago, leading some fans — including one who could be typing at this very moment — to wonder if this day would ever come.

But things are going to be done a little differently the second time around: After each Season 2 episode airs, the following week’s episode will be available to watch on-demand as part of a new marketing strategy.

Who and what are you excited to see when Playing House returns in 2015? (Personally, I’d be happy with more Bosephus and/or Bird Bones.) Drop a comment with your thoughts below.