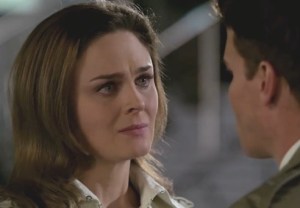 In honor of its 200th episode (airing Thursday at 8/7c), Bones is reminiscing about 10 seasons of scared Booth and Brennan hugs, monumental kisses and endless moments of bonding-while-driving.

And who better to put together the tribute than a superfan of the show? Fox recruited loyal viewer Amanda, a performing arts teacher/freelance video editor, to commemorate the long-running drama, and TVLine has your exclusive first look at the finished trailer.

While there’s many wonderful highlights in the montage, we’re partial to the “I knew, right from the beginning” scene. (Can you believe that was 100 episodes ago?)

Press PLAY to take a trip down memory lane and watch Booth and Brennan’s partnership blossom into romance.