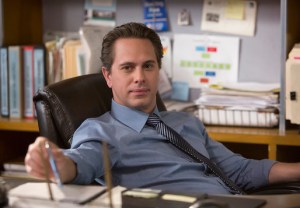 One of the ACN family files the most final of deadlines in this week’s Newsroom. Sadly, it’s not jerky upstart Ray Pruit.

Nope, the series’ penultimate episode is marked by the passing of the bowtie-wearing, heavy drinking, Pruit-placating Charlie Skinner. He dies as he lived — screaming at the top of his lungs in the newsroom — at the exact same time a federal prison gives Will his walking papers.

Meanwhile, Moscow is for lovers, or so Jim and Maggie would have us believe.

Read on for what happens in “Oh Shenandoah.”

ORANGE IS THE NEW WILL | After seeing Will check into prison, we skip to Day 52, when he’s sharing a cell with a chatty, anti-Semetic domestic abuser who’s doing two years for his third offense. The guy (played by Kevin Rankin, Friday Night Lights) tries to pick a fight with the News Night anchor, who demands he stand and face him. “I’m not your wife,” Will growls. “Raise your hands above your hips, and I’ll knock you the f—k into next week.” (Careful, Will: I’ve seen enough Orange Is the New Black to know that kind of nonsense will land you in the SHU!)

That settled, the man proceeds to ask him about everything — the photo of him and his dad on a fishing trip Will has taped above his bunk, his “mission to civilize,” why Will thinks he’s better than him — and Will answers tersely. McAvoy gets a respite when Rebecca and Barry Lasenthal, the government lawyer, visit: Because Lily (Neal’s source) has committed suicide in front of the Department of Justice, all they need is for Will to say she was the leaker, and he can go home. But on the grounds of holding up Neal’s faith in him, the anchor will neither confirm nor deny, so back to his cell he goes.

Eventually, Rebecca submits an order for the court to vacate Will’s sentence, and she’s spoiling for a fight with Lasenthal… so she’s surprised when he’s on board with the action. Jailing Will was supposed to be coercive, not punitive, he notes, and it’s clear McAvoy has no plan to give up the goods. So Will is freed, and as we watch him clean out the cell, it becomes clear that he never really had a cellmate: The other inmate was Will’s dead father, whose face we see in the fishing photo. Makes it clear how he knew that Will’s dad was a drunk, plus all that stuff about the simplicity of the fishing trip, eh?

FROM RUSSIA, WITH… | Across the world, Maggie and Jim wait in a Moscow airport for a flight to Havana, Cuba — the same flight for which NSA hacker Edward Snowden allegedly has a ticket. (Can we talk for a moment about how Maggie speaks Russian? When girlfriend pulled her act together, apparently she really pulled her act together.)

Problem: The pair actually doesn’t have tickets from Moscow to Havana, Cuba; the network’s travel office booked them to Havana, Spain — which Maggie probably wants to rail against, but likely remembers when she very publicly thought “LOL” meant “lots of love,” and thinks better of it. Jim sweet-talks a Havana-bound honeymooning couple into trading tickets with them… but is it really sweet-talking if he also has to hand over his watch, suitcase and the clothes he’s wearing?

So Jim boards the plane wearing an oversize Sochi Olympics T-shirt and pajama pants, which makes what happens next seem all the more ridiculous. First: Snowden spooks and doesn’t get on the flight, meaning that Mags and Jim are headed away from the story rather than closer to it. Second, Maggie divines that her co-worker didn’t call Hallie to apologize when he stepped away a while before, and when she presses him about it, he replies, “I like you, and I don’t really know why you don’t know that.” The look on Maggie’s face is similar to the one on mine; both yell, “Oh dear Lord, we’re going to do this now?”

She says he hasn’t been clear with his feelings and that he never once called her from New Hampshire after their Season 1-ending debacle. She sends him away to sit somewhere else while she processes, but she eventually bids him return so she can kiss him and smile at him. (Side note: Anyone else with me on being very into this relationship in Season 1, not so much now? Or is it just that the standard for fictional airplane hook-ups has been raised?)

NEW WORLD ORDER | Pruit is ruining ACN, from the hashtagged ads (“#uracn,” which is lame, but I don’t agree with Don, who claims it reads like “urine”) to demanding that Charlie have News Night bring on Lady Gaga’s manager to talk about her Defense of Marriage Act tweets. Skinner winds up in the classic middle-management conundrum: The man above him thinks he’s not doing enough to hew to the network’s new agenda, the employees below him think he’s doing too much.

Problem is, Pruit’s tactics have helped the network climb in the ratings and the demo, so it looks like his way of doing business is the new normal. This rankles Mac, who is ordered to give Gaga’s manager airtime; Don, who is ordered to have a college rape victim and the man she says attacked her into the studio for a he said/she said; and Sloan, who makes it her mission to take down ACN’s new acngage app — think Gawker Stalker — singlehandedly.

BETWEEN A RAPE AND A HARD PLACE | Don travels to Princeton to meet with Mary, the student who was raped and who started a Web site that allows other victims to post the names of their attackers. Though he is highly sympathetic to her plight, he point-blank begs her not to come on the show and repeatedly argues that her site — though noble in concept — could one day (falsely) be used by someone with an ax to grind against a jerky ex. Her rebuttal: If it saves even one other woman from having to go through what she’s gone through, the site is worth keeping up. At the end of the meeting, and against Don’s advice, Mary states that she wants to face her rapist on air. (Veep‘s Sarah Sutherland and Thomas Sadoski are great in this scene, by the way.)

SLOAN SUBVERTS AUTHORITY | Meanwhile, Sloan is on the warpath after she learns that ACN has an app that allows people to report celebrities’ comings and goings. She orders Don to talk to Neal’s replacement — her reference to Keefer being her superior “only in the sense of our organizational chart” was gold — but nuNeal does not care that she thinks the app is the worst form of “citizen journalism.” So Sloan does an abrupt course change and invites the guy on News Night to talk about the app, a move Don realizes will get her fired, because of course she’s going to lay into the dude. “I’ll cross that bridge when I come to it,” she says. “You usually blow up that bridge when you come to it,” her boyfriend sagely notes.

And indeed, Sloan skewers nuNeal (I’m not going to even dignify him by mentioning his real name) when he’s seated next to her at the News Night desk. Her arguments aren’t new — an app like that could be unsafe for its targets, doesn’t have any fact-checking measures and ultimately is ridiculous, because who cares if Jimmy Kimmel is drinking at a bar? — but she’s on fire, and it’s a thing of beauty to watch.

SKINNER SIGNS OFF | That is, until the broadcast ends, and Charlie comes bellowing into the newsroom, closely followed by Pruit. Mac reminds him she was ordered to include the segment about the app, Don lies that he couldn’t find the Princeton rape victim and Sloan is unapologetic about the interview she just conducted — all of which turn Skinner into a volcano about to explode. “Is this a mutiny?!” Charlie yells. “It’s an intervention,” Mac says sadly. But all of that gets lost as Pruit threatens to fire everyone who’s ticking him off.

Charlie reminds the oily little guy that he can’t — muttering something that makes me think there’s a protective clause in the contract Pruit signed — and says, “I’ll be back in a minute,” before pausing and falling to the ground, hitting his head on the way down.

As the folk song “Oh Shenandoah” plays in the background, an ambulance hurries the newsman to the hospital, and Will makes his final arrangements to leave the prison.

When McAvoy meets up with his wife later, she hugs him desperately, then tearfully fills him in: Charlie had a heart attack and died.

Now it’s your turn. What did you think of the episode? Ready for next week’s finale? Sound off in the comments!