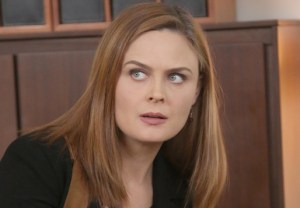 Is the Bones family once again due to expand?

Series star Emily Deschanel is expecting her second child with producer/actor husband David Hornsby, her rep told E! News, raising the question: Will the Fox drama once again write in the actress’ pregnancy, as they did during Season 7?

On the immediate heels of Deschanel’s announcement, a source tells TVLine that a decision has not yet been made about having art again imitate life.

Interestingly, TVLine just a few weeks ago — at Bones‘ 200th episode party — asked Deschanel if Brennan and Booth might add to their brood. Her response: “Anything’s a possibility.”

Do you think it’s time for Christine and Parker to gain a new sibling? (With reporting by Vlada Gelman)