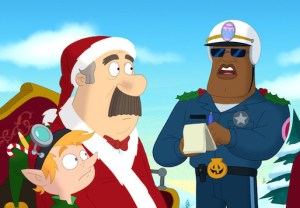 A holiday hero who dishes out pastrami on rye and calls Santa’s reindeer by Seinfeld character names? Yeah, we can get into that.

NBC on Friday premiered How Murray Saved Christmas, an animated special that follows a grumpy diner owner (voiced by Jerry Stiller, The King of Queens) as he’s pressed into service when Santa is unable to make his annual rounds.

Most of the action takes place in a town where all holiday mascots, such as the Easter Bunny and Baby New Year, live. On the whole, it’s a happy little ‘burg… until you listen closely to the elves tinkering in Santa’s workshop. “We work, work, work, work, work, work, work, we work with great endurance,” they sing. “We never miss a day of work, ’cause we don’t have health insurance.”

An enterprising elf named Edison (voiced by Will & Grace‘s Sean Hayes) notices Murray’s ease in delivering complex lunch orders and thinks the old man would make a great replacement. Though Murray initially has no interest, Edison wears him down until the restaurateur is riding the sleigh around the world, nibbling cookies, drinking milk and stuffing stockings with bagels and lox.

Along the way, Murray realizes that making people happy makes him happy — and we learn that he was the mascot for National Milkman’s Day, but when stores started selling milk in cartons, he and his holiday were forgotten. Upon returning home with an empty sleigh and a full heart, he’s in the right frame of mind for an emotional reunion with his true love, Lady Liberty.

You’ve heard a version of this story before, you say? Granted, Santa’s been in peril in several other Christmas movies — and Murray follows the traditional playbook (does anyone really think that all the little girls and boys aren’t going to get their gifts come morning?).

What sets Murray apart is the truly funny script — several lines are laugh-out-loud funny, particularly those that include pop culture references, unexpected rhymes and a throwaway line about intolerance — and snappy song lyrics. Neither are a surprise, frankly, given that the special comes from Mike Reiss (The Simpsons) and Walter Murphy (Family Guy). Plus, who doesn’t enjoy a good celebrity voiceover? (Seinfeld‘s Jason Alexander, Cheers‘ John Ratzenberger and 24‘s Dennis Haysbert also lend their voices to the special.)

That’s what we thought; now it’s your turn. Grade the special via the poll below, then hit the comments to back up your pick!