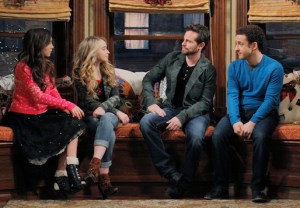 What began as an epic reunion 13 years in the making (Cory + Shawn 4ever!) quickly devolved into the most uncomfortably real holiday ever on Friday’s Girl Meets World.

Was it Thanksgiving? Was it Christmas? Was it both? We may never get the answer to those questions, but thanks to multiple awkward interrogations, we did learn the reason Shawn left New York 13 years ago: He felt left out after Cory and Topanga had Riley!

Naturally, it was Shawn’s mini-me Maya — I love that they addressed that head-on, by the way — who got him to eventually admit the truth. I see a lot of bonding in their future, especially now that we know Shawn will be back more in Season 2.

GMW‘s ambiguous holiday episode also featured the return of (most of) Cory’s family, including his parents and younger brother Joshua, who was a lot younger the last time we saw him. Now he’s the “cool uncle,” yet another sore spot for Shawn. (Maya, meanwhile, could not be more thirsty for Josh, and she makes no apologies for it.)

It was great to see the old gang again — I especially loved Topanga and Amy’s relationship as in-laws — but did anyone else think it was weird that no one mentioned Eric? Or Morgan? Or Angela? Oh well, they’ll all have their day.

I now leave you with my favorite quotes from the episode:

* “Look at this, my favorite person in the world… and my wife!” — Cory to Shawn and Topanga

What was your favorite part of tonight’s episode? Any lingering questions? Drop a comment with all your thoughts below.