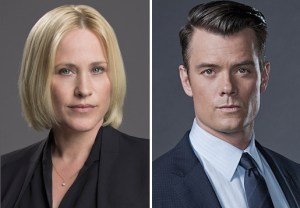 CBS has set premieres dates for two midseason dramas — CSI: Cyber and Battle Creek — and one of them isn’t landing where you thought it was.

CSI: Cyber meanwhile will air Wednesdays at 10/9c beginning March 4, bumping Stalker from the schedule until later in the season.

CSI: Cyber stars Emmy winner Patricia Arquette (Medium) as the head of the Cyber Crime Division of the FBI, a role she first played in an April episode of CSI. James Van Der Beek, Peter MacNicol, Charley Koontz, Shad Moss and Hayley Kiyoko round out the cast.