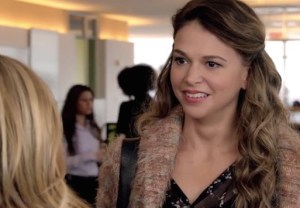 Can “26-year-old” Sutton Foster learn something about female empowerment from Taylor Swift? That question is raised in a brand-new sneak peek at Younger, TV Land’s promising new original series.

From Sex and the City creator Darren Star and premiering March 31, Younger follows 40-year-old Liza (played by two-time Tony winner Foster), a newly single mom who struggles to get back into the working world at such a “ripe” age. When a tattoo artist (The Following‘s Nico Tortorella) convinces her she looks younger than she is, Liza tries to pass for 26 — with the help of a makeover from her BFF (Entourage‘s Debi Mazar). She in turn lands a job as an assistant to a temperamental boss (Swingtown‘s Miriam Shor) and teams up with her new co-worker (Hilary Duff) to make it in the publishing career of her dreams — without anyone learning her secret.

Are you looking forward to Younger?