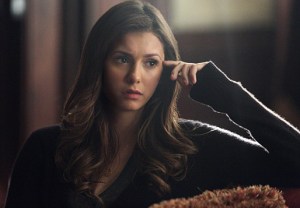 Damon had two clear objectives on Thursday’s Vampire Diaries: (1) Bring Bonnie back from 1994 and (2) convince Elena to love him again.

Sadly, he failed to accomplish either.

Here’s what went down: With a little magical assistance from Liv and a stolen Ascendant from Alaric (more on that later), Damon and Elena returned to Kai’s ’90s hell prison and set up a rendezvous with Bonnie, who was only a 6-1/2 hour drive away from freedom.

With nothing but time to kill until Bonnie arrived, Damon and Elena did what any pair of undead exes would do: They got drunk! For a hot minute, everything was mimosas and vampire pancakes and happiness — until Damon’s little revelation about compelling Alaric to steal the Ascension from Jo. Not only was Elena furious that Damon put Jo’s life in danger, but she also accused him of using Bonnie’s rescue as a way to win her back. (For the record: Elena was wrong. Well, mostly wrong.) 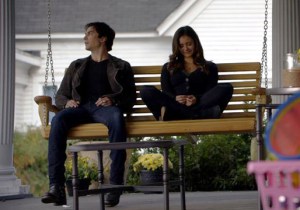 And just when things were starting to look up for the couple — don’t lie, Elena was thrilled that he fixed her porch swing — the duo was zapped back to the present, where an angry (for a change) Kai attacked them, burned the Ascendent and made his way into Mystic Falls. You remember Mystic Falls, right? That places vampires aren’t able to enter? This could be a problem.

LET’S MAKE A DEAL | In addition to discovering some of the finest achievements our modern world has to offer (cell phones = good, skinny jeans = bad), Kai also arranged for a reunion with his long-lost sister Liv, and it did not go well. Lots of door-slamming and magic-choking, mostly. Thankfully, Tyler showed up in time to save her, though introducing himself to Liv’s psycho brother may not have been the wisest move, as Kai was waiting for Tyler upon his return home. (For the record, no good conversation ever begins with “Feel like making a deal with the devil?”) 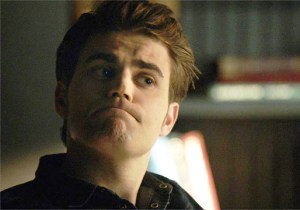 MONIQUE, MO PROBLEMS | After weeks of wondering when this show was going to address the Salvatore brothers’ estranged relative, Thursday’s episode finally set up a face-to-face meeting between Stefan and Sarah… who turned out not to be Sarah at all. She’s actually Monique, a friend of Sarah’s from “sleep-away camp” who decided to hijack her life, though that plan failed twice over when Stefan compelled her to forget Sarah and Enzo snapped her neck. (Side note: Enzo, this is why we can’t have nice things!) 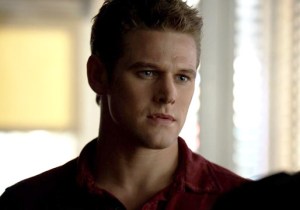 MATTY [DARK] BLUE? | Guys, can we talk about Matt for a second? His little speech to Stefan at the end of the episode — “when push comes to shove, we’ll be on opposite sides” — has me worried, not that I’m not always worried about Matt on some level. At least he’s choosing to target Enzo, with Jeremy in tow, instead of Stefan… for now.

OH, JEREMY | And then there’s Jeremy, who reluctantly got his hopes up about Bonnie, only to have them crushed when Elena reported the bad news. At least this episode had one happy Jeremy scene, a sleeveless jog through the park with Elena. … OK, fine, maybe that was more about making the audience happy than Jeremy. Either way, angst looks damn good on him.

All right, TVD-ers, let’s get your thoughts on this week’s episode: Were you hoping for more Delena action? Were you crushed by that Bonnie-crying-on-the-porch scene? And hasn’t it been way too long since someone’s been killed off? Drop a comment with your next-victim guess below.