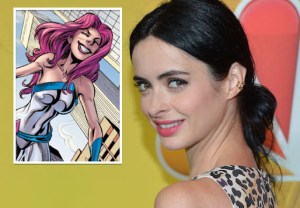 The former Don’t Trust the B— in Apartment 23 star has scored the lead role in Marvel and Netflix’s 13-episode drama Jessica Jones, according to our sister site Deadline.

Netflix’s series finds the former superhero — powers include flight and super-strength — hanging up her cape to open a detective agency. Jessica has multiple connections to other Marvel characters and organizations, including Peter Parker (aka Spider-Man), the Avengers and S.H.I.E.L.D.

Your thoughts on Ritter as Ms. Jones? Drop ’em in the comments section below.