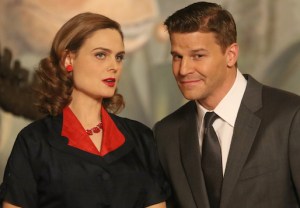 Bones‘ retro glam 200th episode is taking its lovers back to the beginning and reigniting their “will they/won’t they” fire, as seen in this first trailer for the milestone hour.

“We haven’t kissed yet,” Booth — who’s a jewel thief in the outing’s circa-1950s Hitchcockian reality — declares to detective Brennan. “It doesn’t seem like justice.”

Neither is getting stabbed in the back — literally — as happens to one series regular mid-interrogation.

The rest of the Jeffersonian crew has taken on surprising new professions, as well, with one beloved pair appearing to not even mix in the same circles anymore.

“It’s sort of an origin story,” executive producer Stephen Nathan previously told TVLine. “It is the start of the science of forensic anthropology in a bizarre and interesting way. It is seeing [Brennan and Booth] meet the first time again and seeing that relationship begin again.”

Press PLAY to watch the sneak peek, then hit the comments with your thoughts on the alternate scenario.