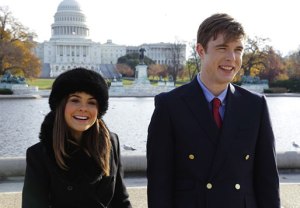 In the second installment, the duo will return to the states to explore American subjects like beauty, holidays, sports, law and order.

* Merlin alum Bradley James will star in Lifetime’s Damien, a new drama series that picks up where the horror film The Omen left off. The actor will play the mysterious child from the 1976 classic who has grown up unaware of the satanic forces around him, our sister site Deadline reports.

* Bravo’s Girlfriends’ Guide to Divorce premiered on Tuesday night to 1.04 million total viewers and a 0.5 demo rating (per TVByTheNumbers), losing a significant chunk of its Real Housewives of Beverly Hills lead-in (2 mil/0.8).

* USA Network’s Chrisley Knows Best on Tuesday night hit series highs in both total audience (with 1.8 million viewers) and in the 18-49 demo.