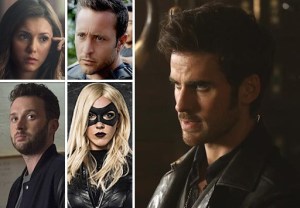 Will Once Upon a Time‘s Killian lose his hook on Emma? Will Vampire Diaries‘ Elena have a merry Christmas? What makes Arrow‘s Laurel suit up? What fresh Hell will Haven unleash? Read on for answers to those questions plus teases from other shows.

Haven‘s winter finale is upon us — how much wine will we need to get through it? –Dawn
How much have you got…? A lot goes down in Friday’s episode, given the “mother” of a bombshell that Charlotte dropped on Audrey. When all is said and done — and following the reveal of one of the coolest Troubles ever plus a highly entertaining exchange of words between Audrey and Mara – no fewer than two major characters will elect to make a tremendous sacrifice in the name of Haven’s greater good. And the very final scene? Creeeeepy.

Any scoop on what’s coming up for Once Upon a Time‘s Hook? –Stef
I am hearing that, as perhaps hinted by Swan’s conspicuous reaction to last Sunday’s liplock, Hook’s heartlessness will indeed impact Emma – and that Belle will get pulled into his predicament, as things get ever dicier. Bonus Scoop: For Episode 15, Once is casting the possibly recurring role of a king whose crown was hard-won, and the fight to keep it has taken a toll. He is also described as “handsome, though not refined, and highly protective of his family.”

Any info on Hawaii Five-0‘s Mirrah Foulkes (who plays Ellie Clayton)? –Russell
And how! In the new year, watch for Foulkes to put in another appearance when Ellie and McGarrett go toe-to-toe — in a boxing ring?!

Pretty Little Liars is one of my favorite shows. Do you have anything on that? –Sabreen
How about some scoop on Mona’s ghostly return to Rosewood this coming Tuesday? The late, great Ms. Vanderwaal has a few big surprises for 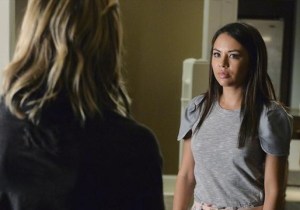 Alison up her sleeve, though it might not be what fans are expecting. “The real surprises are the ones she offers to Alison, who finally gets to see things through Mona’s eyes,” executive producer Marlene King reveals. Bonus Scoop: We’ll get to see more of the past through Mona’s eyes in 2015. Says King, “She will offer us, through flashbacks, more insight into her life… and her death.”

Any scoop on Vampire Diaries‘ Damon and Elena??? I need it like a water in desert… — Enya
Drink up, Enya: Elena may have admitted to feeling a “glimmer” of love for Damon, but don’t bank on a full-on reunion just yet, no matter how romantic the holiday season may be. Per executive producer Julie Plec, “There is mistletoe in the midseason finale, and fans are free to wish for anything they want — and also prepare for crushing disappointment in the way that we always tend to like to serve it to them.” Take that as you will.

Did Arrow‘s Marc Guggenheim mention anything about under what context Laurel is going to be wearing the Canary outfit? –Kathleen
The EP wouldn’t go into specifics, but allowed, “Something happens in the midseason finale (airing Dec. 10) that makes it necessary. Which is not to say [Laurel wears it] in the midseason finale, but the impetus [for the costume] will happen then.”

Everyone always asks about Arrow‘s Oliver and Felicity, which is fine, but I would rather get some spoilers on Quentin or Roy or Thea for once. –Nikki
Hey, I’m all about spreading the love, and with regards to Ms. Queen, I’ve got EP Marc Guggenheim saying, “There’s a lot of Thea and Felicity coming in the back half of the season. They’ll be sharing quite a bit of screen time in 2015, and it’s very interesting.”

Is Agents of S.H.I.E.L.D. Season 2B premiering a week earlier now that Agent Carter is premiering with two episodes? –Matt C.
Excellent question, but no, S.H.I.E.L.D. will still resume its run on March 3.

CBS’ Scorpion is my favourite new show! Do you have some scoop, preferably about Toby and Happy? –Daisy
“That’s a very complicated relationship,” EP Nick Santora tells us. “Toby is a student of human behavior and emotion, and Happy’s an expert at hiding her emotions. We want to see them progress toward hopefully getting together one day, and while we can’t promise if that will happen or not, we’re moving that relationship along. And it might take a big step in Episode 15.”

Is it true that The Flash 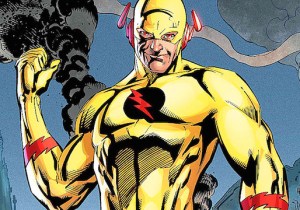 will be introducing Reverse-Flash very soon? That seems more like a season finale sort of thing. –Greg
The iconic adversary’s introduction apparently was — wait for it — fast-tracked. In the midseason finale (airing Dec. 9), “Barry and Reverse-Flash come face-to-face,” Grant Gustin affirms. The actor then makes clear that it’s not The Flash who meets the foe, but Barry—”and it rocks him, to say the least. It terrifies him.” After it is confirmed to Barry that Reverse-Flash killed his mom, “It’s kind of a relief in some ways, because it confirms that Barry isn’t crazy and that what he thought he saw as a kid is true,” Gustin previews. “Now he is more determined than ever to find this guy and stop him, kill him. This might be a special circumstance where Barry would break a neck.”

Anything to share about my new CW obsession, Jane the Virgin? –Leslie
Previewing singer Paulina Rubio’s guest-starring turn, as herself, in the fall finale (airing Dec. 15), Andrea Navedo says, “It has to do with Xo’s aspirations as a performer. She’s always idolized her, so a sort of fantasy/dream life bleeds into reality for Xo, and she actually gets a wish fulfilled.”

Do you have any scoops on Bones squintern Wendell Bray? –Mary
Recurring player Michael Grant Terry notes that “things are going a little bit better now” for Wendell – including the possibility of a love interest (played by Tony nominee Shalita Grant) who’s a literal Florence Nightingale. Health-wise, the actor says, “There’s still a looming fear of the unknown, of coming out of remission at some point, but things are looking good for Wendell.”

Any scoop on Law & Order: SVU you’d be willing to share? –advanteege
Prepare to meet later this season Detective Amaro’s sister Sonya, a “brassy, sassy, buxom” (well that’s specific) and “street smart former party girl” who, despite her “proclivities,” is a great aunt, sister and daughter.

How is the relationship between Reign‘s Mary and Conde going to play the rest of Season 2? I know romance wouldn’t be exactly following history, but their chemistry is undeniable. –Danielle
Conde and Mary’s bond will continue to grow, I am told — and that will eventually force Mary to make a decision that could put those involved in grave danger.

Have you any information on The Fosters‘ Christmas episode? –Tricia
Sorry, Tricia, but I’m gonna skip right past the holiday outing (airing Monday) and instead gift you with some knowledge about the end of Season 2, where we will meet Robert’s parents – including Robert Quinn Sr., a wealthy, domineering patriarch who during a heated dinner table debate just might detour his son’s opinion about his parental responsibilities.

I loved the season premiere of The Mentalist — things are pretty nice between Jane and Lisbon. But I can’t help but notice that Jane’s still wearing his wedding ring. Will that be an issue in future episodes? –Charlie
Funny you should mention wedding rings, Charlie, seeing as for the series finale, airing Feb. 18 and titled “White Orchids,” the CBS drama is guest-casting the role of a jeweler who’s pulling a fast one on a young couple when Jane intervenes. One has to wonder if Jane might then pursue other business with the merchant….

Real questions, real answers. If you need the Inside Line on a favorite show, email InsideLine@tvline.com! (With reporting by Vlada Gelman, Andy Swift and Rebecca Iannucci)