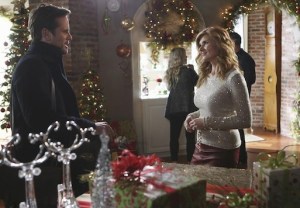 “On the first day of Christmas, my true love gave to me… a tell-all Rolling Stone cover story! And when I got over the shock and told her I still loved her, she basically told me to stuff it. Fa-la-la-la-la-la-la-la-la!”

While Deacon doesn’t exactly sing that little mash-up in this week’s holiday-tinged Nashville, he probably should, because it’s an accurate representation of what happens. But before you start crooning “Blue Christmas” for all of the Music City folk, take heart in the fact that Juliette and Avery cannot deny the fact that they go together like egg and nog — can a reunion be right around the corner?

Also, Layla sleeps with Jeff. Coal for you, young lady! Let’s review what happens in “Two Sides to Every Story.”

TOUGH TINSEL | Luke and Rayna have decided that taping a Christmas special at her house is a really good way to raise money for Toys for Tots… and it won’t hurt the couple’s album sales, either. When Deacon shows up to give Maddie her lesson, he looks warily at the over-the-top decorations — it definitely looks like The Nutcracker threw up in there — and the pair talk about how Rayna, Luke and the girls will be in Australia for the holiday. Across the room, Luke scowls.

But it’s Deke who starts making faces the next day when he gets his hands on Rayna’s Rolling Stone and realizes that she told the world the details of their relationship. When he drops off a travel guitar for Maddie, he gives Rayna a shoulder so cold, Santa could set up his workshop on it. Ms. Jaymes — who, by the way, is wearing a blouse from the Kris Jenner Fancy Pilgrim line — pulls Deke aside to explain how she talked about their relationship in order to protect Maddie, but he doesn’t want to hear it. “You gave him us, what we had,” he spits disapprovingly before taking off.

IT’S NOT SUCH A WONDERFUL LIFE | Luke doesn’t understand why Rayna can’t just let all the drama about the RS story go, but he gives her his approval to address the situation directly with Deacon later. So Ray goes to his house, where he’s no longer ticked. Everything she said in the interview was true, he says, as is this fact: “I love you. That’s it. It’s easy.” He loved her while she was married to Teddy, he loves her now that she’s with Luke and he’ll go on loving her for as long as he can. (Side note: I may be a Grinch about how many times we’ve gone on the merry-go-round with these two, but even my crabby heart grew three sizes upon hearing Deacon once more proclaim his feelings. Can the man monologue or what?)

Anyway, she ruins it all when she tells him that she’s getting married in two weeks, and he’s got to understand that she’s moved on. Oh Rayna, didn’t you see Love Actually? At Christmas, you tell the truth. 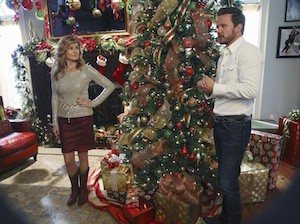 She goes home and finishes the Christmas special by singing “Baby It’s Cold Outside” — AKA the date-rapiest of holiday songs — with Luke. And when the taping wraps and everyone congratulates each other, Rayna winds up standing alone in her festive sweater. (Side note: Alone in a Festive Sweater is going to be the title of my memoir about sneaking leftover pie in the dark of my parents’ kitchen late on Christmas Eve.)

BOOT-SCOOTER BOOGIE | When Sadie and Gunnar engage in some songwriting, at first I think that maybe the show is going to pair them off… and then I realize it’s just that Laura Benanti has chemistry with absolutely everyone. When Ms. Stone mentions that she wants a new producer, Gunnar recommends Avery. A little misunderstanding and a lot of hormones later, Juliette is wearing a scarf, sunglasses and a hat and riding an old-person scooter as she stalks him at the Winterville Nashfest. As he and Sadie are discussing possibly working together, Ju catches her baby daddy’s eye — and in an attempt to get away, she accidentally backs her scooter into a vendor’s rack, knocking everything over and making a big, preggo spectacle of herself. I don’t know — the visuals of Juliette careening through the crowd and later sheepishly patting her belly might be worth all of the insanity.

THE TURTLE STRIKES AGAIN | Elsewhere at the outdoor music festival, Will and Layla dress like “hipsters” (read: they both wear black knit caps) and revel in the fact that no one there knows they’re reality stars. Like a fabulous heat-seeking missile, Will somehow sniffs out the beer stand manned by an openly gay hot guy. Mr. Lexington drinks a few too many and then tries to kiss the bartender, but the guy protests that he’s in a committed relationship and that “there’s more to it than anonymous hook-ups, or at least there should be.”

Meanwhile, Layla impresses some festival-goers with her earnest girl emoting — and Jeff Fordham is among the impressed members of her crowd. They chat, he plays guitar rather well, he apologizes for dismissing her as a hack… and she winds up spending a naked night at his place. You know what? NO. Nope nope nope nope nope, Nashville. I will not think of the smirky turtle as a human being. Please tell me that this episode is an aberration, that Jeff’s oily smugness will be back in full force next week? (Side note: Now accepting names for Jeff’s college Dave Matthews cover band in the comments. I’ll get you started: Pants Marching, Stripping Billies, The Rest of What’s Around…)

ACTUALLY, I AM LEAVIN’ WITHOUT YOUR LOVE | Meanwhile, Sadie’s manager is interested in getting the ZAG band out on the road, but Gunnar’s not interested because it’ll take him away from Micah. His refusal is the final straw for Z, who leaves for Los Angeles (for good?). And although Terry’s performance brings the house down, it’s too much for him to bear. He drinks and yells at Scarlett that she’s pushing him to do something she’s scared to do herself — and after crying about it, she suddenly volunteers to sing Zoe’s parts during the ZAG SAG performance that night. I adore the ZAG/SAG music; if Nashville wants to make them more of a thing, that’d be fine by me. (Though maybe you can cool it with the PTSD talk, Scar? You choked and hid under a piano, you didn’t take enemy fire in ‘Nam.)