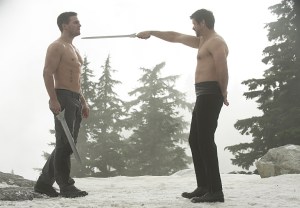 On a snowy winter day, Oliver Queen climbed a mountain to fight Ra’s al Ghul — without a shirt, naturally.

That’s the easiest way to sum up the following photos from Arrow‘s fall finale (airing next Wednesday at 8/7c on The CW), in which the hero sets a fateful meeting with the League of Assassins baddie.

But first, Nyssa (returning guest star Katrina Law) shows up in Starling City with a deadline for the crimefighter, from her father: find Sara’s killer in 48 hours or the city’s citizens will start going bye-bye faster than Oliver’s clothes. (Not that we’re complaining, mind you!)

Click through the gallery to get a sneak peek, then hit the comments with your thoughts on the face-off!