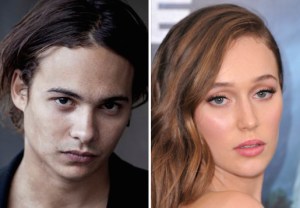 The Walking Dead‘s companion series has started building its cast.

British actor Frank Dillane (Harry Potter and the Half-Blood Prince‘s Tom Riddle) and Aussie actress Alycia Debnam Carey (McLeod’s Daughters, of course) are the first to board the AMC project, which is set during the same “zombie” apocalypse that Rick, Daryl et al are dealing with, but in a different geographical location.

The as-yet-untitled series revolves around a male teacher and a female guidance counselor; per our sister site Deadline, Dillane and Debnam Carey will play the latter’s drug-abusing son and ambitious daughter.