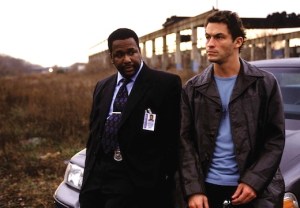 The Wire is getting a little tightening for the holidays, so to speak.

HBO’s acclaimed, Baltimore-set drama has undergone a high-definition remastering that will be unveiled with a late December marathon on HBO Signature, followed by a digital debut in January and finally a Blu-Ray release next summer.

According to the cabler, all 60 episodes of The Wire have been remastered for “a tighter fit on widescreen TVs and computer/tablet screens. The original negatives were scanned, edited, dust-busted and color-corrected with great care and attention taken to stay true to the look and feel of the original Standard-Definition 4×3 version.”

UPDATE: Series creator David Simon has gone into detail with his thoughts on the 16×9 widescreen conversion, which, in a nutshell, he has grown accustomed to.

The HBO Signature marathon will play all five seasons consecutively, beginning Friday, Dec. 26 at Noon/11c, and ending on Tuesday, Dec. 30. (The show will be available in HD on HBO GO starting Dec. 26, as well.)

Subsequently, The Wire: The Complete Series in HD will go on sale at iTunes, Google Play, X-Box Video and Vudu on January 5. The exact Summer 2015 release date for a HD/Blu-Ray version has not yet been set.

Stoked about seeing The Wire in a new light? Will you be watching the full 60 hours or just turning in for specific episodes? Sound off in the comments!