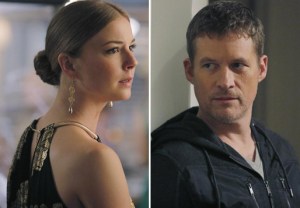 Revenge‘s James Tupper recently told TVLine he wanted Emily and David Clarke to form a “badass double-ninja organization,” and it looks like he’s finally getting his wish.

New photos from the ABC drama’s midseason finale (Sunday, 10/9c) find the estranged duo teaming up, though their endgame remains a bit of a mystery. The tense look on Emily’s face during her conversation with Agent Taylor suggests she suspects her of no good, but then again, “tense” is pretty much Emily’s resting facial expression.

There are a few key players missing from these photos, though. Neither Daniel nor his baby mama are anywhere to be seen, while Victoria is also M.I.A. from the festivities. We do know that a major character bites the bullet this week, so could they have something separate going on?

Browse photos from Sunday’s episode below, then drop a comment with your best guesses: Who’s saying bye-bye to Revenge this week?