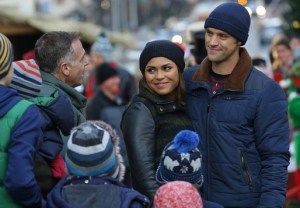 Has someone been naughty during the holiday season on Chicago Fire?

Last week’s emotional moment between Dawson and Mills leads to a whole lot of tension between Casey and his fiancée — and a drunken night out on the town — during Tuesday night’s fall finale.

Dawson attempts to apologize, calling it “stupid bar talk,” but Casey doesn’t think her confiding in her old flame about current troubles at home is nothing. Dawson bonds with Brett about how things were simpler back in the day – when Casey was engaged to a doctor, Brett points out! – while Casey drags Severide out for a drink. Or two. Or seven. Before he knows it, Casey is waking up on some random girl’s couch. Fearing he might have been a naughty boy, Casey makes amends with Dawson for his “jerk” behavior.

“We’ll work it out,” he assures her before confirming with Severide the details of their night out. (When you’re looking to Severide for clarity, you know it’s bad.) As it turns out, Severide is the one who slept with the girl, while Casey passed out in the living room. But just because nothing happened doesn’t mean he isn’t in trouble. The blonde bimbo, as Dawson dubs her, shows up at the firehouse with Casey’s phone, leading to a screaming match between the couple.

“Maybe this whole thing is too big for us,” Casey argues. “I’m trying to be a lieutenant and your fiancé, and you can’t respect either one.”

The pair leave it on that ugly note as Dawson asks for permission to go home, where she ends up crying by herself.

* Mills and Brett disappear during a call after a mysterious black car shows up at the location. Casey and the rest of the truck crew find the abandoned ambulance and an injured man, but no sign of the paramedics. Is there anyone who doesn’t think that mobster Anthony staged the incident to get payback against Mills for his son’s death? 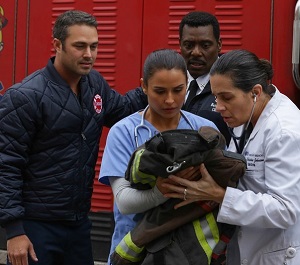 * Boden doesn’t want to hyphenate his son’s name because tradition, like turkey on Thanksgiving – yes, that is the comparison he makes – is important. Hey, can someone please drag Boden into the 21st century? Thanks! Boden and Donna don’t have much time to argue about it as she goes into labor, delivering the baby in the middle of a traffic jam. When they finally arrive at the hospital, the baby boy goes into respiratory failure.

* Molly’s II also makes it debut when the truck crashes and burns into a nativity display at a Christmas festival! Some good does come out of the cursed vehicle: Hermann donates it to a soup ktichen.

Chicago Fire fans, what did you think of the fall finale cliffhanger? Grade the episode below, then hit the comments to back up your pick!