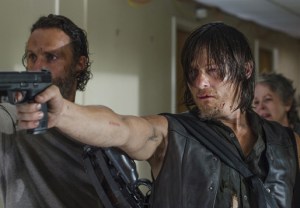 The Walking Dead may have bid farewell to a fan-favorite survivor on Sunday, but it also said hello to a record-breaking number of viewers.

The midseason finale nabbed 14.8 million viewers, including 9.6 million adults 18-49, according to AMC, which is up 23 and 24 percent respectively from last season’s corresponding episode.

Additionally, the Talking Dead aftershow was watched by 6.6 million viewers, including 4.2 million adults 18-49, which is the highest-rated installment to date.

* Idris Elba (Luther) is set to star in Discovery’s The Idris Elba Project, a six-part reality series premiering in 2015. Per the show’s description, viewers will watch Elba push “his body, mind and engineering know-how to the limit by racing on land, water and in the air.”