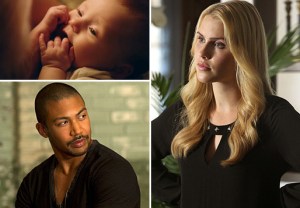 The Mikaelsons “start to fall back into their familiar patterns” when Rebekah returns to New Orleans on The Originals‘ Dec. 8 midseason finale (The CW, 8/7c) — but does that mean a rekindling of the Rebekah/Marcel flame is in order?

“I will say that I definitely shot a scene with him,” Claire Holt tells TVLine of her screen time with Charles Michael Davis, “but I can’t say whether it’s romantic or positive or whatever.”

Either way, Holt says her two episodes back — the first of which aired Nov. 24 — were “beautiful” to shoot because “when Rebekah left in Episode 116, it was just a crazy time for her. There was a lot of tension and friction [with her brothers], so this is one of the few times the family can come back together on the same team.” (Well, almost the entire family.)

The most difficult part of Rebekah’s visit, of course, will be returning baby Hope to her parents, a task Holt admits her character struggles with. Big time.

“We learn how much raising Hope has led Rebekah to crave that child of her own, even more so now than she already did,” Holt explains. “She knows Hayley is Hope’s mother, and she has to return her, but she’s fiercely protective and loves that child. It’s going to be difficult for her.”

And even though Rebekah is only slated to appear in these final two episodes of 2014, Holt reminds us the possibility for another visit is always open.

“I love this show,” she says, “and you never know where the story is going to go. I wouldn’t shut the door.”

What do you hope the future holds for Rebekah, Marcel and the rest of the Big Easy’s supernatural residents? Drop a comment with your thoughts and theories below.