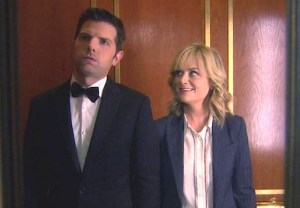 Parks and Rec‘s final season will air new episodes back-to-back every Tuesday at 8/7c, until its hourlong series finale arrives on Feb. 24, leading out of The Voice.

“Mike Schur and Amy Poehler, along with their incredible producers, cast and crew, have given us one of the great television comedies of all time, and we’re inordinately proud of Parks and Recreation,” NBC Entertainment Chairman Robert Greenblatt said in a statement. “In an effort to give it the send-off it deserves, we wanted to ‘eventize’ the final season to maximize the impact of these episodes, which really do take the show to a new level. The highly anticipated one-hour finale will air behind The Voice in order to lead the largest audience possible into what promises to be a very special hour of television.”

What do you think of the weekly double-pumps for Parks and Rec‘s farewell run? And are you any closer to being ready to say goodbye to Leslie, Ben, Ron et al?