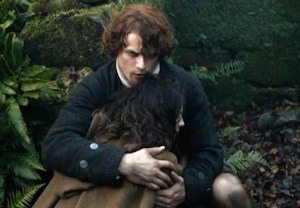 Here’s something to get Outlander fans’ kilts a-twirling: Starz has released a brief-but-tantalizing video sneak peek at the rest of Season 1.

In the 20-second clip, scenes from the second half of Diana Gabaldon’s epic novel flash by while Colum’s voice warns brother Dougal that his actions will cost him his head “right onto a pike.”

PHOTOS What TVLine Is Thankful For: A Good Surprise, Homeland Revival, Outlander Is In and More

Meanwhile, Claire is led in chains, Jamie bleeds on the ground, Geillis looks worried, various people fight, Claire cries that she “never counted on loving” her husband, and Mr. and Mrs. Fraser sit locked in what seems like a very dejected embrace. (Those in the know will be aware of what they’re seeing; for the uninitiated, let’s keep it spoiler-free, shall we?)

Press PLAY to see what’s ahead.