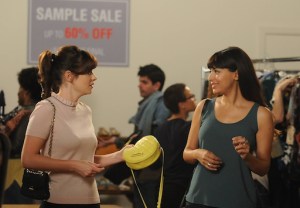 Jess and Cece both want the same purse in this week’s New Girl.

You wouldn’t think that would lead the ladies, who have been friends since childhood, to a fight of cage-match proportions… but it does.

In this exclusive sneak peek at the episode, titled “Girl Fight,” star Hannah Simone details how the besties communicate their anger (apparently, “double syringes” are emoji you never want to see) and recounts how refreshing it was to take a punch to the face during filming.

“I don’t get to say that very often,” Simone muses.