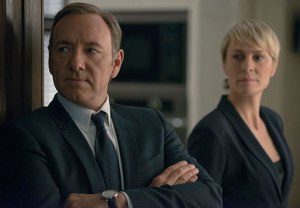 Fluff your pillows, stock your fridge and watch out for oncoming trains; House of Cards‘ third season has an official premiere date.

The political drama will return to Netflix with all-new episodes on Feb. 27, 2015, the streaming giant announced Monday.

Naturally, the announcement came via a “special message from the White House”:

A special message from the White House. https://t.co/YxFcHfA5qy

The Kevin Spacey-led series was renewed for a third season before its second season even premiered in Feb. 2014.

What do you hope to see in HoC Season 3? Drop a comment with your wish list below.