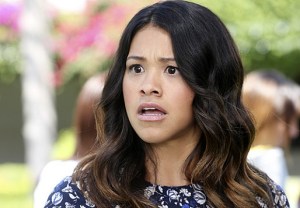 The upside of Michael’s broken heart on Jane the Virgin? He has more time to focus on his work, which means the Sin Rostro mystery is heating up — and everyone’s a suspect!

“There’s some pretty intense detective stuff going on,” Michael’s portrayer Brett Dier previews. “It’s pretty insane. I can’t give away much, but they go pretty intense into that investigation and some crazy things happen.”

But perhaps nothing as nuts as the “shocking” reveal of the Man Without a Face’s identity, which will be unmasked by Episode 13.

When viewers finally do learn who Sin Rostro is, it will be someone they already know. But don’t expect that fact to lessen the blow of the twist.

Adds Dier: “I couldn’t believe it. I didn’t see it coming. You never really can in this show. I’m excited for people to see it.”

Who do you think the baddie is? Hit the comments with your theories!