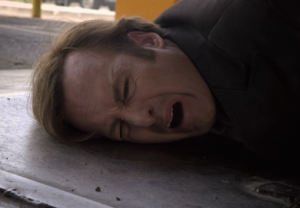 AMC released the first Better Call Saul footage Sunday, and from the looks of it, the titular lawyer’s people skills were questionable long before he hit Breaking Bad.

In the clip, which played during The Walking Dead‘s midseason finale, Bob Odenkirk’s Saul has clearly had a run-in before with Jonathan Banks’ Mike. And though the men don’t seem it in the brief interlude, might this be the beginning of their long friendship? (Well, OK… “mutually beneficial working relationship?”)

Saul‘s two-night series premiere will air Sunday and Monday, Feb. 8 and 9, 2015.  Press PLAY on the video below to see the first footage.