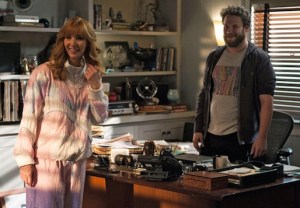 THE SHOW | The Comeback

THE EPISODE | “Valerie Is Brought to Her Knees”

THE PERFORMANCE | “I haven’t done a sex scene since I made out with Alan Thicke in that Growing Pains flashback,” exclaims Kudrow’s self-absorbed sitcom actress Valerie Cherish midway through this week’s riotously funny and frequently horrifying installment of The Comeback. Yet while Kudrow’s ability to score laughs in the midst of Valerie’s long-running, typically desperate quest for respect in Hollywood is the hallmark of her recently revived HBO comedy, the show’s latest episode gives her the opportunity to embody her character’s complexities in new and breathtaking ways.

First, the setup of “Valerie Is Brought to Her Knees”: In her second day of shooting a new HBO dramedy called Seeing Red — written and directed by Val’s one-time nemesis Paulie G about their days on the failed sitcom Room & Bored — Valerie (essentially playing a version of herself known as Mallory Church) must shoot an oral sex scene opposite A-list co-star Seth Rogen (playing “himself” as he essentially plays a version of Paulie, with whom Valerie never had an intimate enocounter, she reminds anyone who’ll listen).

Val’s self-doubt going into the scene, however, gives way to revulsion when she begins to realize Paulie is working through some sort of misogynistic revenge fantasy in his construction and direction of the scene. As Valerie (in her hideous “Aunt Sassy” tracksuit) gets flanked by two giggly (and completely naked) young women named Monica and Celeste, Paulie blurts out that Rogen’s character “is imagining you two while she’s blowing me so I can get aroused.” Paulie’s mix and match of third- and first-person is a shock to everyone in earshot, but Kudrow lets us see Valerie register the ick factor, then quickly drift into her happy place. “So free. So beautiful, really,” she smiles with faux positivity at her porn-star-esque scene-mates, who then launch into a series of orgasmic groans that leave poor Val wavering between emotionally numb and physically stricken. “That was hell. That’s where I was,” she later tells her makeup artist Mickey, and the frankness of Kudrow’s delivery makes clear that — 10 years after the humiliations of Room & Bored — Valerie isn’t so blinded by the on-set lights, is more accutely aware of the sacrifices she’s making for one more shot at the big leagues.

By the time Paulie places her on her mark for the big sex scene, though, Valerie’s carefully constructed perkiness is the half-deflated balloon in a dusty corner: She’s grimacing with nausea one second, bravely staring ahead the next, then looking like she could burst into tears. With very few words and using so many of the tics we’ve come to associate with the polarizing Valerie character, Kudrow opens a window to one woman’s internal negotiations about how she’ll play through the pain — or maybe get out of playing altogether. As Val grills Paulie for how she’s supposed to perform the sex act — “eager? reluctant? not at all?” — Kudrow turns up the urgency of each word, making Valerie’s anxiety almost unbearable. And when Paulie admits he wrote the scene as a punishment fantasy, Val finally snaps — right as she and Rogen begin filming. “It’s been a long day,” she blurts in a botched attempt to ad-lib like her co-star. “Why don’t you just rape me?!” Valerie says the line with her typical bad-sitcom hamminess, but there’s real rage and anxiety in the mix, too, thanks to the way Kudrow isn’t merely reading her lines but compleyely living in them.

Rogen, finally, uses his movie star clout to rescue “Gingersnaps” — artfully pressuring Paulie to film the bulk of the scene as a closeup of his face. That gives Kudrow one last chance to relieve the tension with some good old-fashioned chuckles, as Valerie drops to her knees, ducks out of camera’s view and finally rests her head awkwardly in Rogen’s lap. It’s not a pretty sight — but thanks to Kudrow’s commitment and fearlessness, it’s a beautiful achievement in acting.

HONORABLE MENTION | Saul Berenson has spent much of Homeland‘s first three seasons serving as the calm ying to Carrie Mathison’s combustible yang. But Season 4 has presented us with a version of the former CIA director previously unseen: alternately frightened, defeated and inflamed. In Sunday’s superbly tense episode, all of those emotions came boiling over as a captive Saul became an unwilling participant in no-win prisoner exchange — and, man, Mandy Patinkin was at the height of his craft. As Saul dug in his heels and protested his role as jihadist pawn — first by refusing to get out of that van and later by holding a solitary sit-in on the tarmac — the despair and anguish in Patinkin’s eyes was soul-crushing. Thank God Carrie (a typically spot-on Claire Danes) knocked some sense into him in time to save the mission and his life. By taking Saul/Patinkin out of Homeland you really do let the terrorists win.

HONORABLE MENTION | MTV’s Faking It has always set out to surprise its viewers with taboo topics, steamy storylines and jokes that boldly tow the line of good taste. But on Tuesday’s midseason finale, the biggest surprise of all came from star Rita Volk, whose gripping speech at her character’s most desperate hour had us asking, “Wait, is this even a teen show?” While the speech itself gave Volk a blueprint for success — kudos to co-writers Carter Covington and Carrie Rosen — she took it to the next level with her own blend of emotional depth and quirky humor. And even though the confession largely revolved around recent events, it was essentially two seasons in the making; and thanks to Volk’s emotionally stunning performance, it was a confession worth waiting for.

HONORABLE MENTION | Showtime’s The Affair has spent its freshman season telling the same story via two different perspectives. But in both versions, Joshua Jackson’s Cole Lockhart comes off as a cold, detached husband who isn’t mourning the loss of his son in quite the same way as wife Alison. That all changed in Sunday’s episode, after Cole learned his wife had been unfaithful to him. Although his initial reaction — telling Alison her affair was not his problem — was unsurprisingly distant, Jackson infused Cole with vulnerability at long last just a few scenes later. It began with a simple question (“Was it something I did?”) and ended with Cole sitting on a Brooklyn sidewalk, openly sobbing about how profoundly his son’s death has destroyed him. “The only thing that made it better for me, so I could just breathe for a second, was you,” Cole told his wife. But it was Jackson who left us breathless this time, as he finally revealed the broken man underneath Cole’s tough exterior.