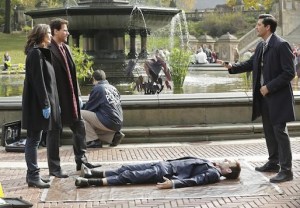 Can Forever‘s Henry multitask or what?

In the following exclusive sneak peek at Tuesday’s episode (ABC, 10/9c), the immortal medical examiner manages to deduce a rather important detail about the murder at hand, offer a history lesson and look down his nose at American ignorance — all in about a minute-and-a-half.

“Does no one understand the difference between nobility and royalty?” Henry asks incredulously to those gathered around the fresh corpse of a fellow Brit. (Understand? Maybe. Care? Nope.)

According to the episode’s official synopsis, investigating the man’s murder “leads Henry and Jo through one of New York’s top luxury department stores and from working class to upper crust New York society.”

Meanwhile, Henry remembers a time in the ’50s when he and his family had to bug out to protect his secret, and Abe runs into an old crush.

Press PLAY on the video below to watch Henry in action.