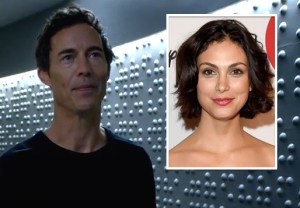 The Flash‘s Gideon is… Black Canary??

Gideon was first featured in the Nov. 25 episode of the CW freshman, when Dr. Wells reevaluated their plan for test “subject” Barry Allen, as regards his and The Flash’s impact on the events of the year 2024.

Baccarin’s geek-boy bona fides include Firefly, V and Fox’s Gotham (where she soon will debut as DC Comics’ Dr. Leslie Thompkins), while her other TV credits include Homeland, The Mentalist and The Good Wife.

Baccarin next can be seen in Lifetime’s The Red Tent miniseries (airing Dec. 7 and 8) and reprising her role as The Mentalist’s Erica Flynn (on Dec. 14).