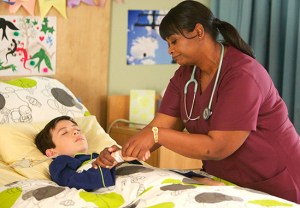 The doctors are out… after 13 episodes.

Fox will not be picking up additional episodes of Red Band Society beyond its initial 13-episode order, TVLine has learned. Production on the rookie medical dramedy will wrap next month after completion of Episode 13.

Two more episodes will air — tonight and Dec. 3 (both at 9/8c) — at which point the show will be pulled from the schedule. The remaining three episodes of the season will be scheduled at a later date.

A network insider says Red Band could still return for a second season, but that seems unlikely.

Red Band Society opened low back in September, with 4.1 million total viewers and a 1.3 demo rating (while earning an average grade of “B+” from TVLine readers). Most recently, its eighth episode drew 3 million viewers and a 0.9 rating.