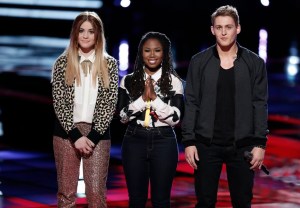 Where are the Spice Girls when you need ’em?

No, that’s not me throwing shade at Taylor Swift’s performance of “Blank Space” on tonight’s Top 10 results telecast of The Voice. It’s just that Season 7 of NBC’s reality-singing juggernaut could use a quintuple dose of girl power, rather than just the single shot brought by The Pop MegaSeller Formerly Known as Country.

I mean, how many talented chicas have fallen by the wayside — Toia Jones, Maiya Sykes, Amanda Lee Peers, Brittany Butler, Alessandra Castronovo and Jean Kelley, just to name a few — in the past three months, while OMYawn-inducing dudes like Taylor John Williams and Damien and that other one continue a forward march past Thanksgiving — and maybe even into the finale?

I guess it’s just going to be one of those seasons where the pickins are slim and the iTunes downloads are kept to a minimum. It’s not just me, right?

On that note, let’s recap the shock and awe of Top 10 results.

Last Chance Performances
Reagan James (Team Blake) — “I’m Like a Bird” | Dressed in a tragedy from the Blanche Devereaux Collection, this likely future pop star struggled mightily with the breezy melody and hip-hoppy cadences of Nelly Furtado’s underrated ditty. Someday, we may jam to her on the radio, but today is not that day. Grade: D+

Anita Antoinette (Team Gwen) — “The Remedy” | Anita’s a whole lot of fun most of the time, but you know what wasn’t fun? Listening to the sound of at least a third of this upbeat ditty’s notes get shoved into a food processor on “liquify.” Still, based on her overall body of work – and the lack of a “Last Chance” TKO — she deserved the save. Grade: C-

Ryan Sill (Team Gwen) — “Collide” | How is it that Ryan turns everything he sings into musical Gerbers? I call this one “Strained Peaches and Strained Glory Notes.” Grade: C-

At this point, it was time to Tweet for some type of cosmic “justice.”

It was all in vain, however, as America voted to #VoiceSave… Ryan Sill. FOR THE SECOND STRAIGHT WEEK. #ALLCAPSANDNOTEVENASHAMEDOFIT I’m not sure what the Voice Nation sees in this fella, but my relationship to the Billboard Hot 100 grows chillier and chillier by the month, so maybe I’m too old to get it.

Yep, Season 7 is down to seven dudes and one lady. Good luck with the math, DaNica!

On that note, I turn things over to you. What did you think of Top 10 results? Did America get it right with the Bottom 3? Was the right artist saved? If not, what would you have done differently? Sound off in the comments!