‘Tis the season to give thanks — and not just because of the national holiday/food-a-thon taking place this Thursday.

BBC One dropped a gourmet treat onto TV lover’s computer screens on Tuesday when it tweeted the following first-look photo at Sherlock‘s forthcoming Season 4 special, along with a trio of hashtags: “#221back #Sherlock #notkidding.”

In July, co-creator Steven Moffat confirmed that a three-episode Season 4 was in the works — along with a 90-minute special that would begin shooting in January 2015, for possible broadcast next Christmas.

Season 3 of Sherlock concluded with the face of the crime-fighting duo’s presumed-dead nemesis Moriarty being broadcast across every TV set in the land. The episode “Sherlock: His Last Vow” snagged seven Emmy awards this year, including Lead Actor and Supporting Actor in a Miniseries or Movie respectively for stars Benedict Cumberbatch and Martin Freeman.

Check out the new Sherlock image below — complete with fancy hats and Watson’s much-loathed facial hair — then share your thoughts in the comments! 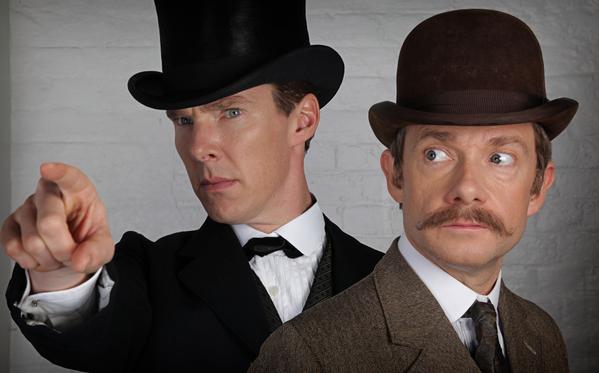